The painting begun with the installation of the gun mount, but without the guns themselves yet, and masking the insides of the mount, to protect the paint already there:

The bottom of the hull was painted red oxide Humbrol 113, then the center of each bigger surface were picked out in olive drab Humbrol 66, using an airbrush:

The top of the model was painted similarily - preshading in Humbrol 113 and centers of the panels in Humbrol 66:

All the model was then covered with a mixture of water and "Sidoluks" floor polish acting as acrylic clear with additions of black acrylic paint and "Vietnam Earth" pigment from a company called CMK. After it dried, the decals were put on using "Mr. Mark Softer" solution, and again recoated with the mix mentioned above. The ragged national star on the front door and the yellow bridging marking were painted using stencils cut from masking tape, and the paint was applied with a sponge:

On the photo below you can see the comparison of the kit's vinyl tracks (on the right) and the individual link tracks from the AFV Club set number 35046 "T91E3 Track" (on the left). It turned out I had to buy two such sets, because the first one didn't have enough parts to build both runs of track (75 links per side):

The tracks were first painted a mixture of Humbrol 113 (red oxide) and Humbrol 53 (metallic gray): 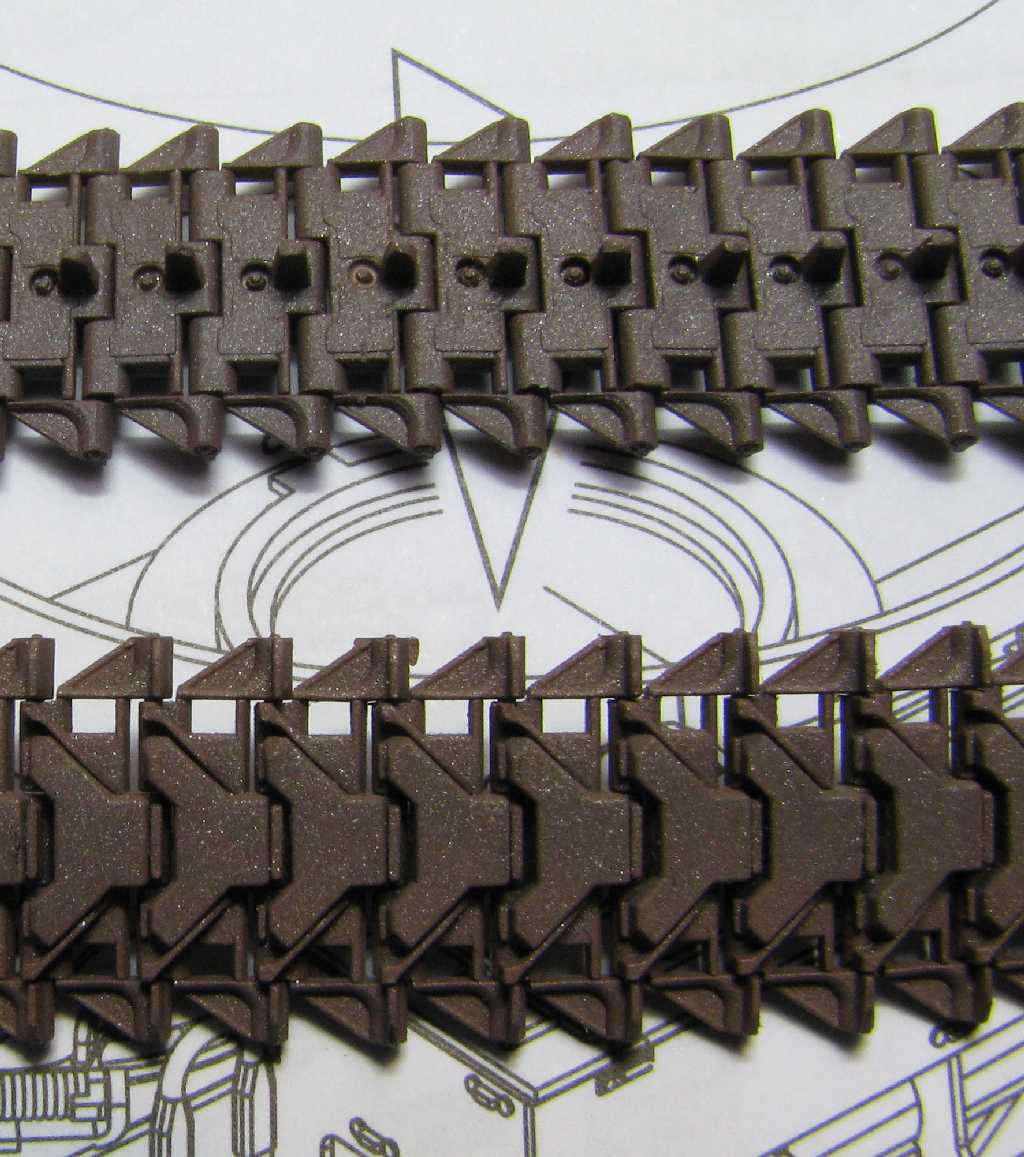 Then I masked off the tracks, to show material wear in places where the road wheels move on the track.

I pictured the raw metal using Humbrol 53 paint (metallic gray), and the rubber with Humbrol 32 (dark gray). The rubber pads included in the AFV Club track set have let me simulate worn rubber by sanding the track with sanding paper: 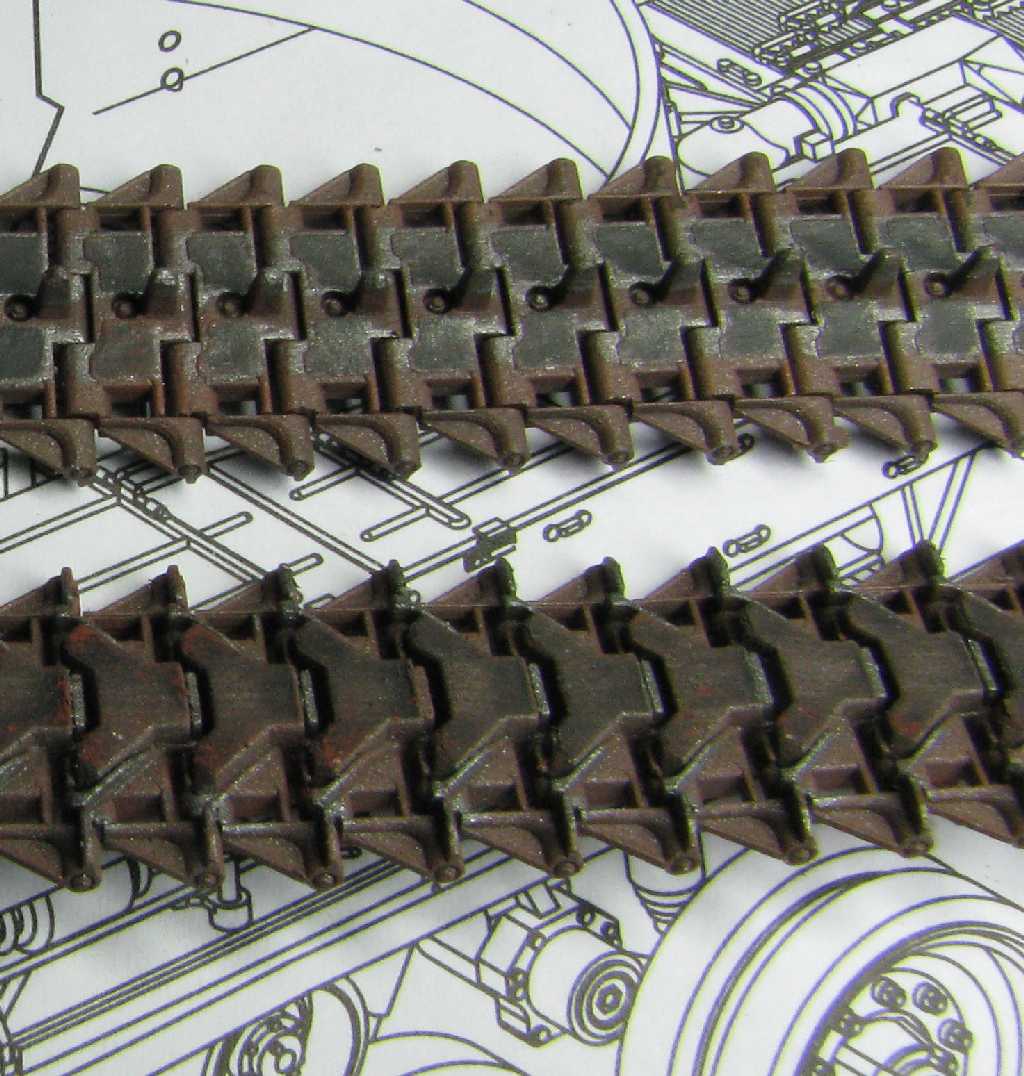 Finished tracks put on the model:

Driver's and track commander'r hatches installed on the model. Arrows point to the latches that keep the hatches open in a real vehicle: 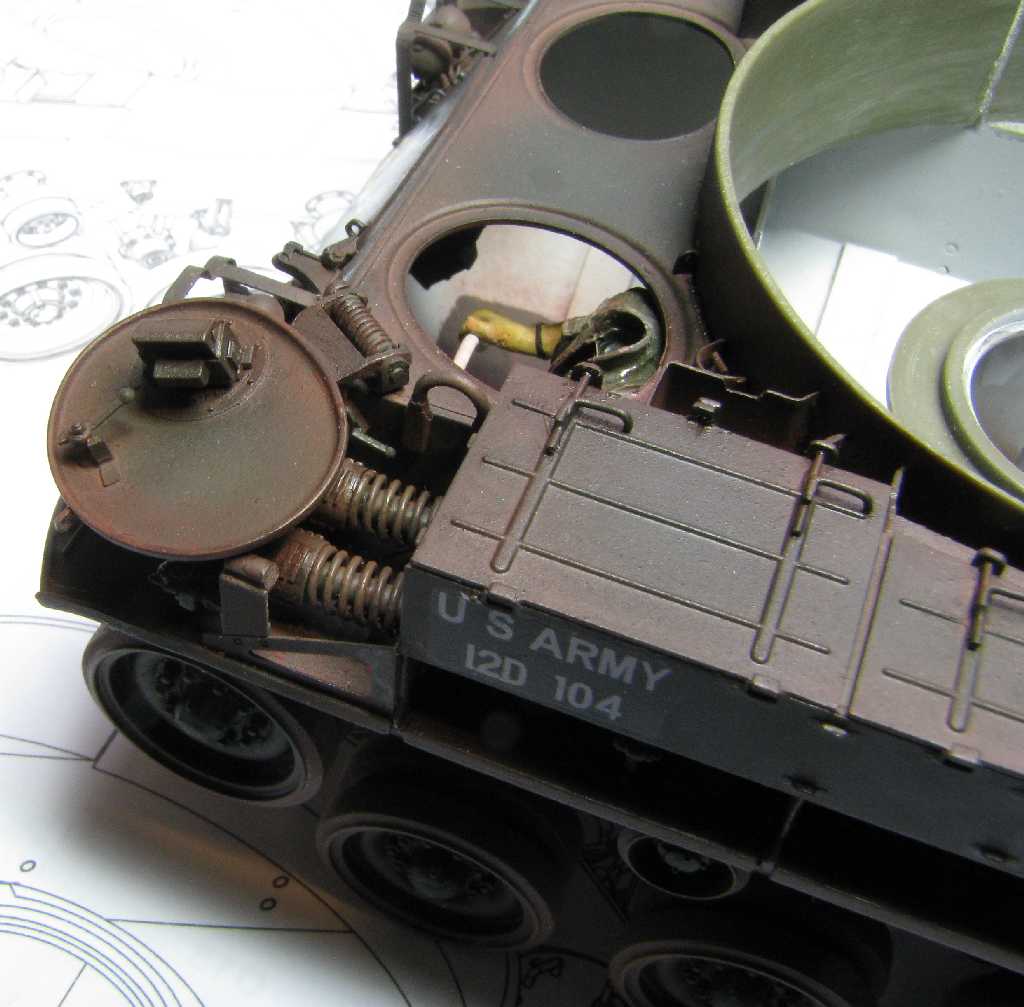 Jump seats of the ammo loaders. The top part comes from the old Tamiya kit. Below are parts scratchbuilt by me and taken over from my old model. The seats have their bottoms made out of wood veneer, to show wood structure - like in the real thing, where the seat bases were plywood. In the bottoom of the photo there's the AFV Club kit part:

The seats assembled, painted and weathered: 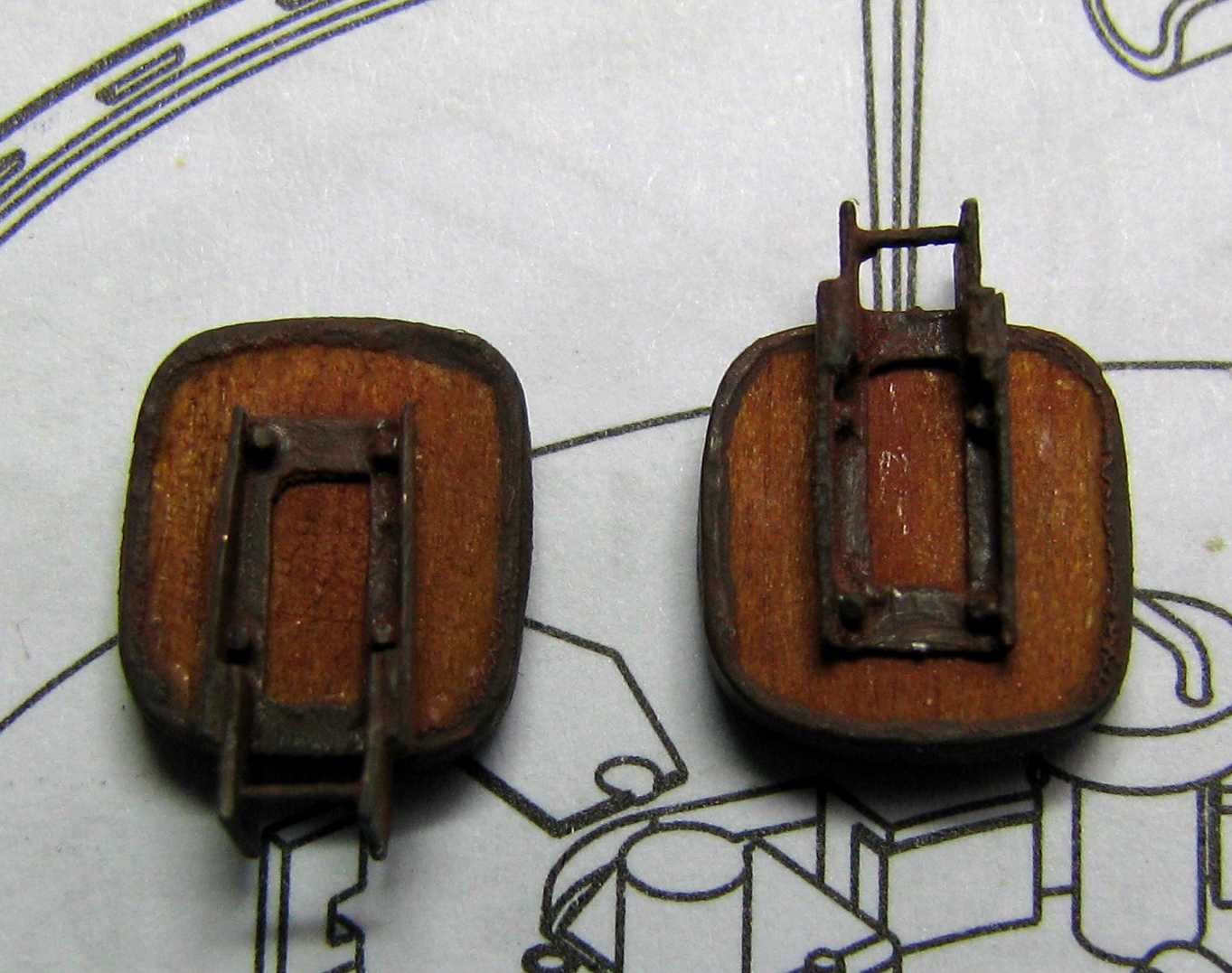 The armoured "wing" of the weapon mount with a binocular holder (photoetched detail from the Eduard set):

After painting (with Tamiya binoculars installed):

Gunners business office, with the motor controller stowed, and it's wiring:

Radio antennae, that will be put on the gun mount. They are made out of guitar string. The antenna on the left is a AT-912/VRC with a MX-2799 base:

M1942 machette in a sheath, scratchbuilt out of sheet styrene: 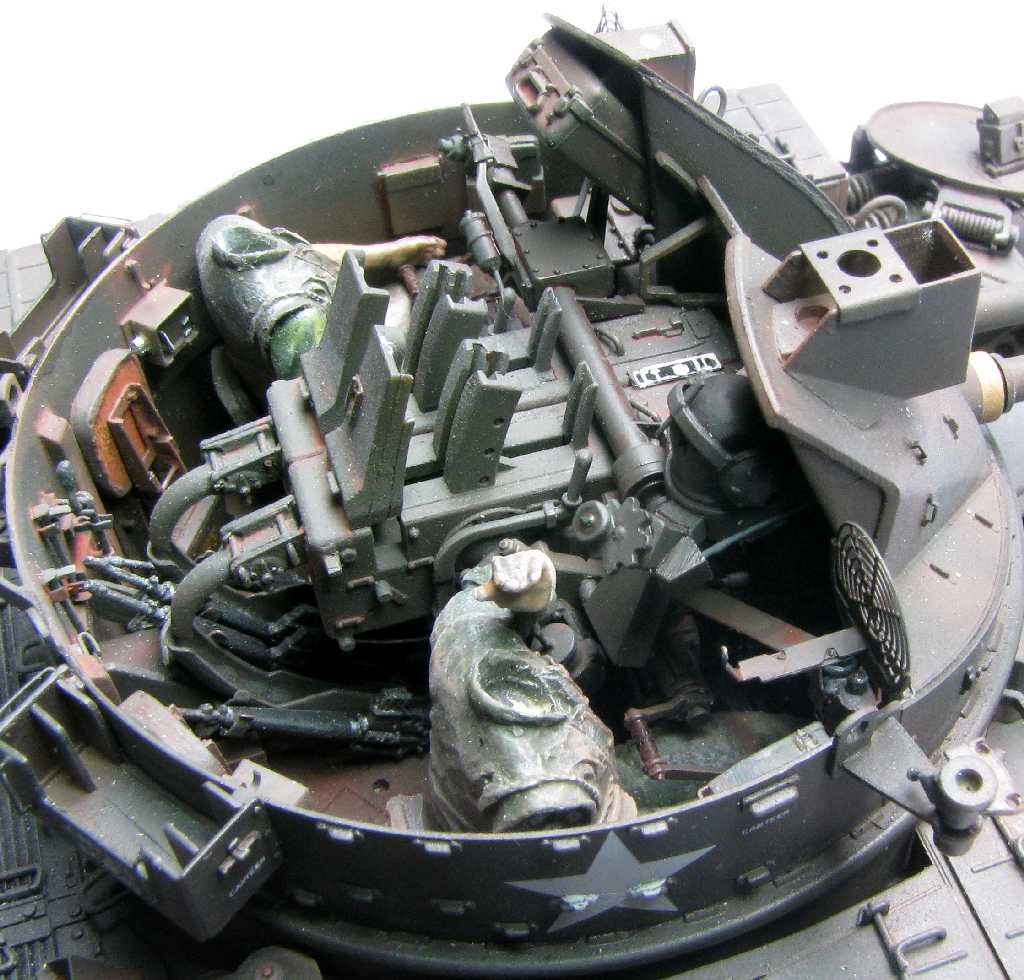 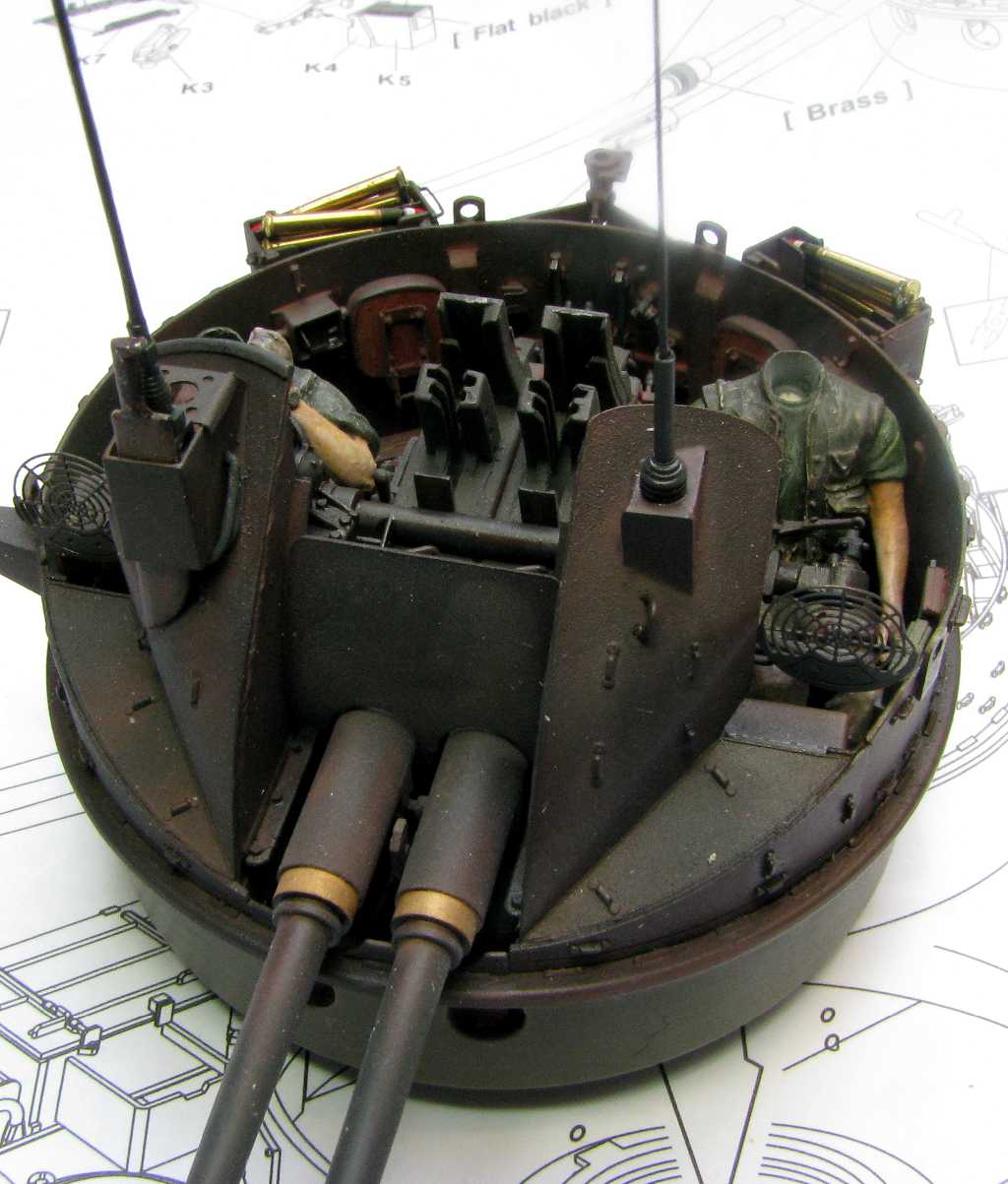 Gas mask pack and machette put on the radio antenna base: 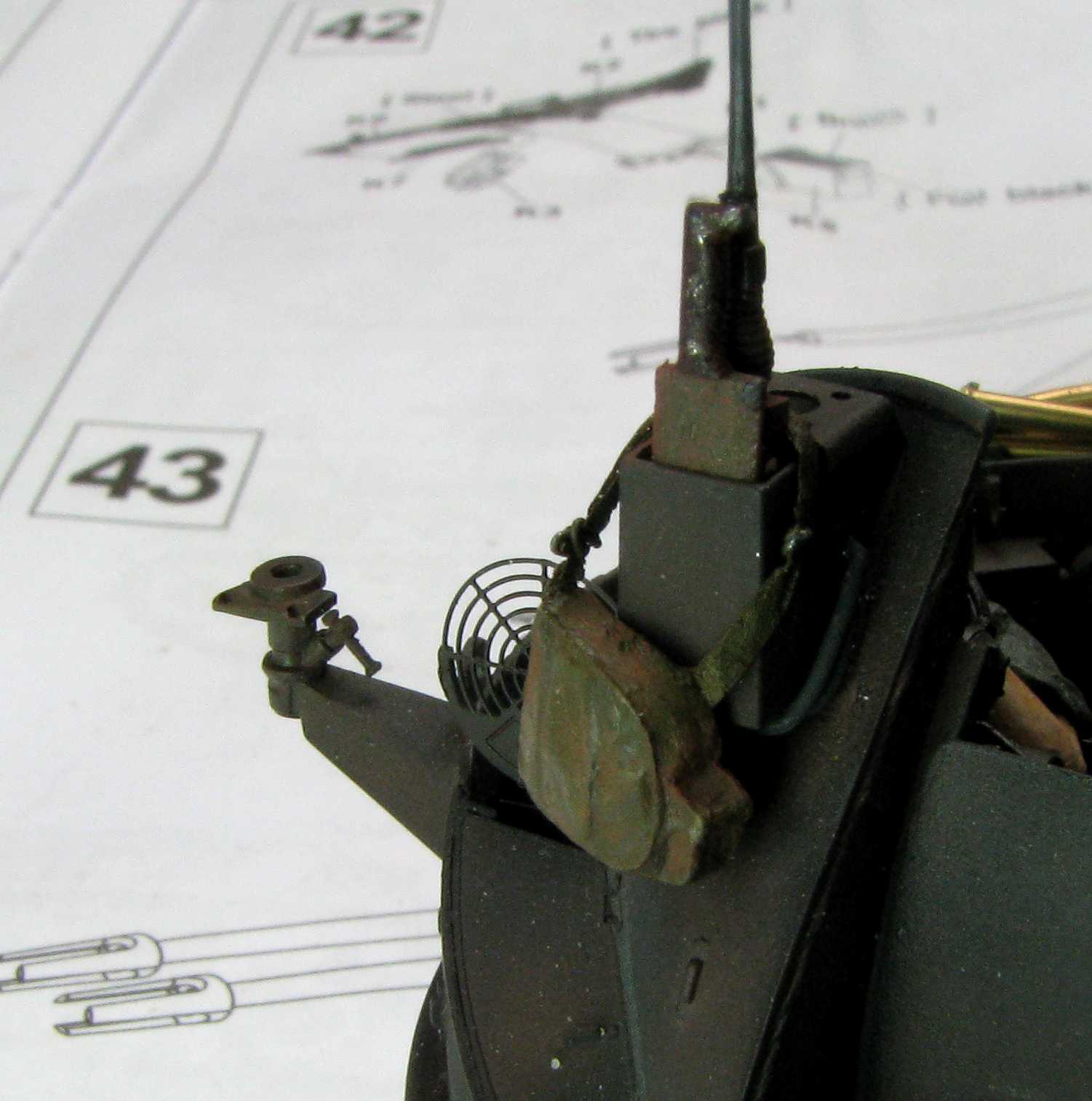 Tools to be installed on the right side of the vehicle:

Tools for working on the track and spare track links on the left side of the vehicle:

Front of the hull with the ragged national star and the headlights painted:

The water can in its place:

M60 machine gun - I decided to use a converted Tamiya M60 with Dragon's bipod. There's also a load bearing belt with two canteens and two ammo pouches. The canteens and the ammo pouches come from a Dragon figure set, the belt is made out of tissue: 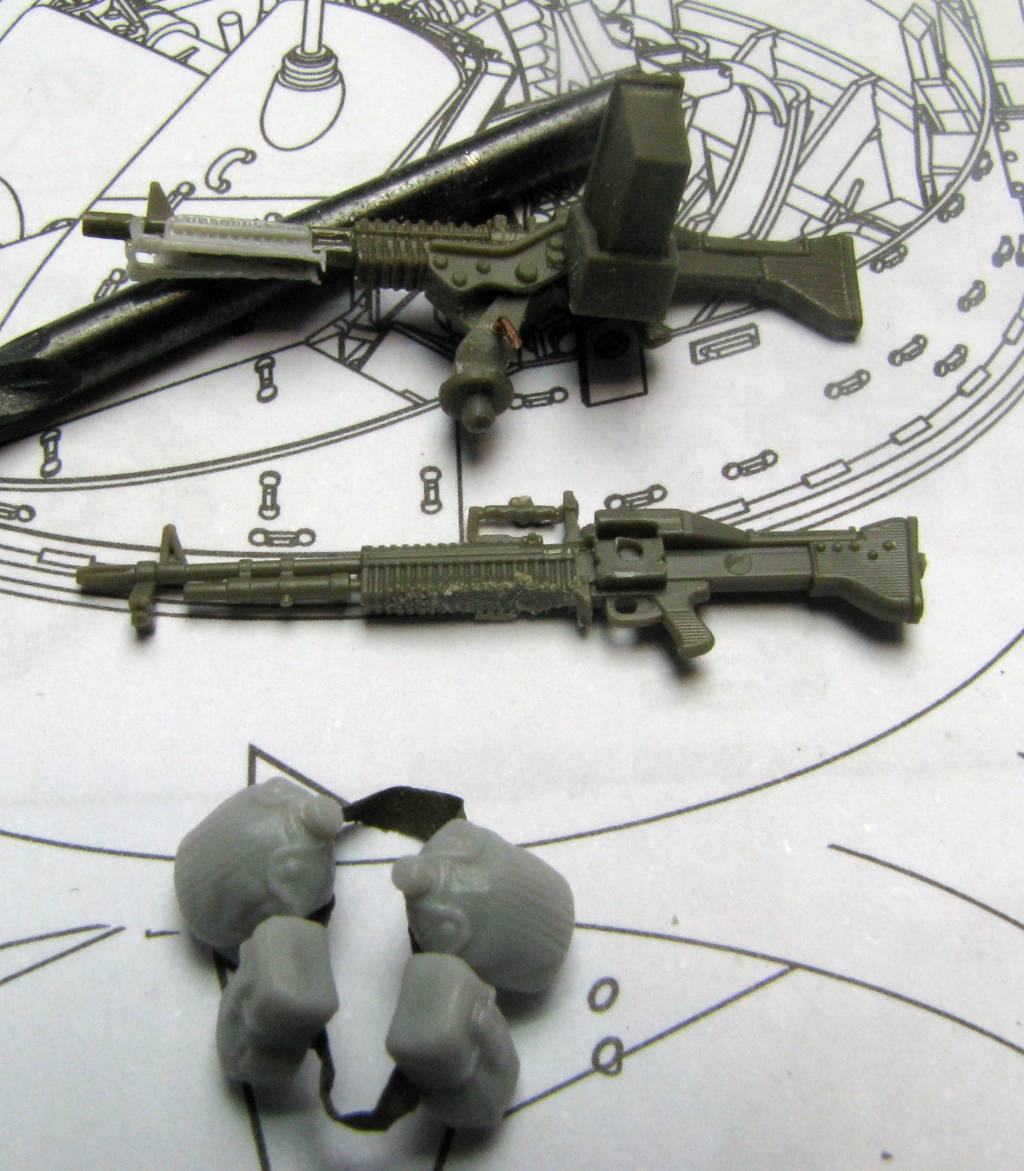 The belt and the machine gun now painted, there's also the machine gun tarp made out of Pawelite - it's a material consisting of two layers of tissue with a layer of alluminum foil sandwiched between them:

The tarp wrapped around the machine gun:

"The stuff" installed on the vehicle:

Completed ammo in its holders:

The skull hung on a piece of polyurethane foam - a historic photo detail that I decided to depict: 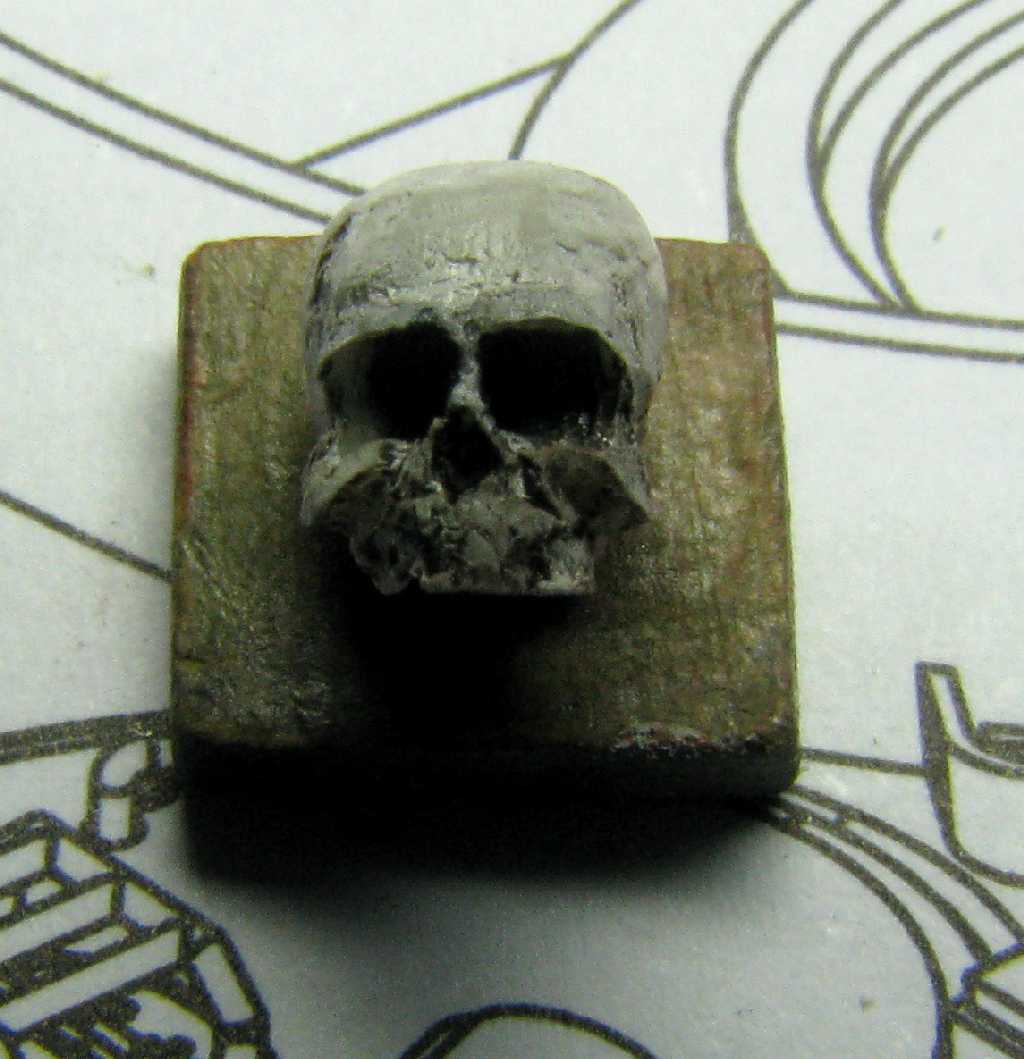