I have decided to correct some kit parts that are dissapointing by using 3D printed parts:

I started the build with the hull, that consists, unlike in similar kits that tend to have one-piece tub, of flat sides that have to be glued together to form the hull. Luckily they fit very well, so building the hull didn't cause any problems:

The turret, or more correctly, cab was constructen in a similar manner, with separate roof, sides and floor. The gun can only be built depressed fittingly for the travel lock - it doesn't have real trunnions and the design of the kit makes showing it elevated a serious conversion. The instructions require the builder to open several holes - depending on the version being built (other Revell boxings let you build a German version, for example). Unfortunately I have manged to loose one of the lifting eyes after it broke away and I had to build it from scratch. It is also worth noting how the bore evacuator (that funny round part just behind the muzzle brake) should be installed - it has a flat portion along its circumference and that flat portion should point down. I mention it, because the instructions photo show it pointing up (how did that happen?).

I have installed the road wheels "dry" on their axles, without glueing them, and then glued the tracks to the wheels. This way I created removable subassemblies that make painting everything easier. The tracks are "link and length" - meaning straight runs are represented with sections consisting of several track links molded together, and portions going around the idler and sprocket wheels are made out of individual links. That system works very nicely here:

I added one part I think is important for an M109 model and it's missing from the Revell kit - the duct for the air lines used to inflate the lotation bags that could be installed on the M109s. As those bags, like the whole flotation kit, was almost never used, from the A2 version on the air lines together with their duct were deleted - causing a problem for many model manufacturers. Many models that should show the duct (like this one) don't have it, and many models that shouldn't - have the part (like the 1:35 M109 A2-A6 by Italeri). I made the duct out of styrene sheet (in white):

At this point most of the assembly was done, so I started painting. As there were problems using airbrush I experimented with applying acrylic and oil paints with a brush - and I had my objections as to the results. I have also applied the kit decals at this stage:

At last, after a longer break in the build process, I have taken the airbrush and finished painting the model, finally supplemented by an acrylic wash. Just then I started to like the results:

Then I started to work on the stowage. In Vietnam there was usually not much stowage on the M109s, because the standard operation for longer moves was to tow a two-wheel trailer with all the stuff behind the howitzer. So a howitzer without the trailer would only have the most necessary and issue items. So that's what I tried to model:

In the photo above you can see two shovels that come from the Revell kit, cartons that I have built myself, a crate, two bed rolls and a duffel bag and also two food/drinks containers from the Black Dog equipment set, and also a machine gun and ammo boxes that were 3D printed (see links at the top of this page).

The C-ration cartons I mentioned were made by wrapping a styrene block (cut from a 1,5mm styrene sheet) in piece of paper, appropriately printed and taken from a document envelope (had just the right "cardboard" colour). The cartons are 7 by 4.5 by 1.5 millimeter in 1:72:

Here's the difference between kit and 3D printed parts:

I have also installed the headlights:

The only thing left to do was to install the stowage appropriately, and the model was done: 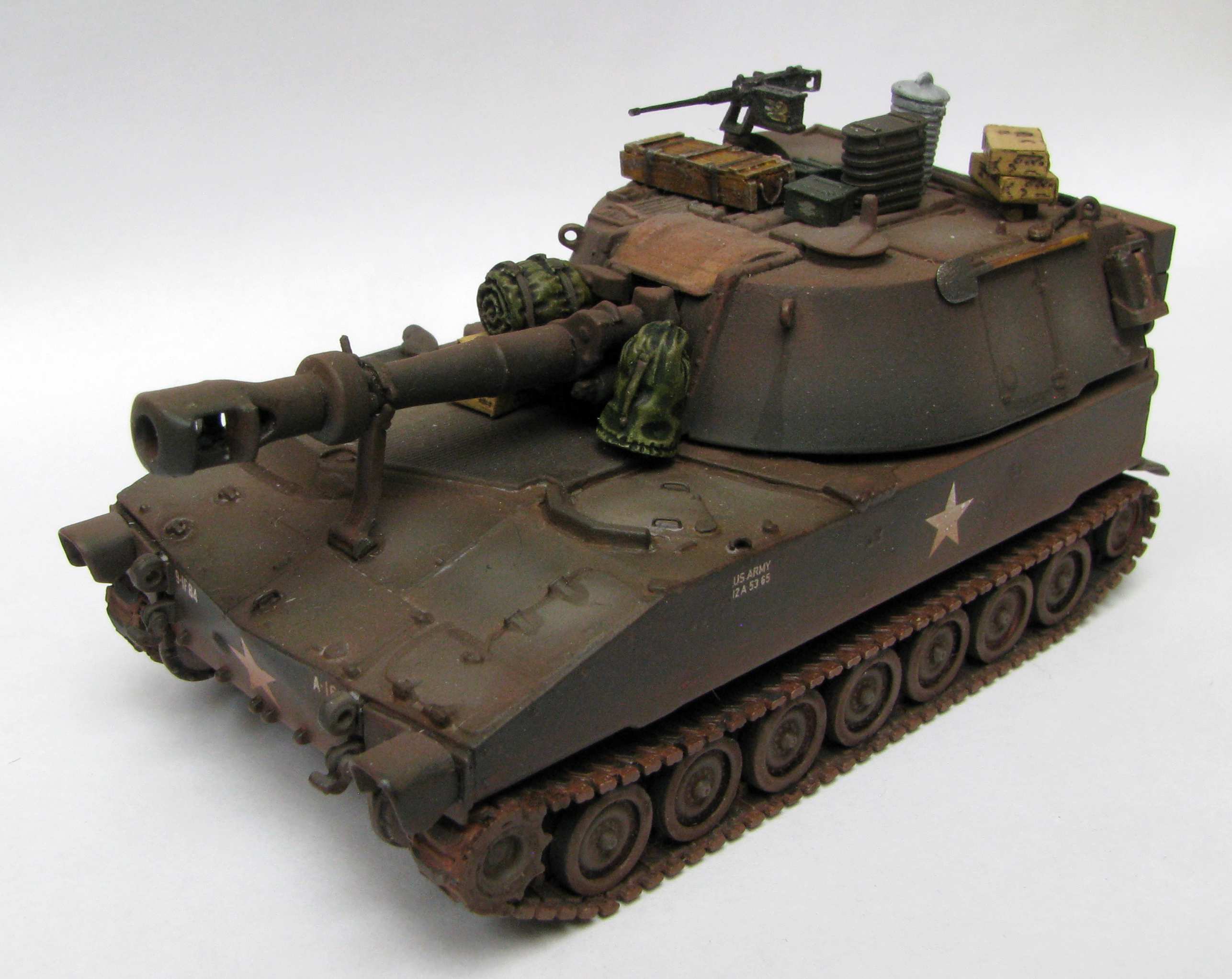