I started working on the vignette on display after I got a good deal on Verlinden's set no. 392, „Good Morning Vietnam”.

I wanted to buy this set for a really long time, but when I already did I started to have my doubts about it. How come the man has crates, poncho and things like that and he puts his behind straight into the Vietnam mud? I have read a text denying such possibility especially hard - here:http://grunt-redux.atspace.eu/mike2_us171.htm

After consulting people who have fought in Vietnam I have come to the conclusion, that the vignette has to be reworked. The thing is the base of the vignette is cast in one big resin part together with the legs of the resting soldier:

After I have gathered all my courage I have just used my jewellers jigsaw and have cut the legs out of the base - this turned out to be much easier than I have expected. The most important thing was providing enough water at the time of cutting, to keep the harmful resin dust down:

The next step was to cut the unneeded resin off the legs:

The cut off part has served as a plug to close the hole in the base. The spot was later filled using black Milliput:

I have put yet another crate on the base - this one coming from Academy's set number 13260:

Additionally I have fitted the legs of the resting man to a setting, whe re he will sit on the crate and not in the mud.

I have also removed the grenade that was "just laying around" – according to the Veterans something like this just wouldn't be accepted, just too dangerous.

I started painting the face of the soldier - I've used Humbrol paints for this. Paint number 63 (sand) was used as the base coat.

The base coat has to dry really well - more than 24 hours - and after that I have applied a wash made of Humrol 113 - red brown.

While the wash was still fresh I have dry brush shaded the face with a mix containing white and pink.

I have painted eyes on the face prepared like described above. A single hair (mine) served as the piant brush here. Instead black and white I have used light and dark grey, to take the contrast down somewhat:

I have also painted the eyebrows and the lower lip - brown is a good colour for that. The hair was painted using a mix of grey (Humbrol 27) and sand (Humbrol 63). They were lightened using straight Humbrol 63.

Other parts of the vignette were painted using Games Workshop paints. As it turs out, if you choose your colours right, you can also paint realistic military figures with them, not only fantasy stuff. A big advantage of those paints is their quick drying time, this allows the modeller to work quickly and with no unnecessary breaks.

Movin' on, I have painted the parts of the vignette "from the bottom to the top" - first the ground, then the crates, ice cooler, backpack, jacket and so on.

I'm quite happy with the way the galvanized layer on the ice cooler came out. It was done by putting some aluminium coloured paint on a silver-painted surface with a sponge. But the layer that mede that finish was a very thin light gray wash:

The jacket on the ground is supposed to have ERDL camo pattern: 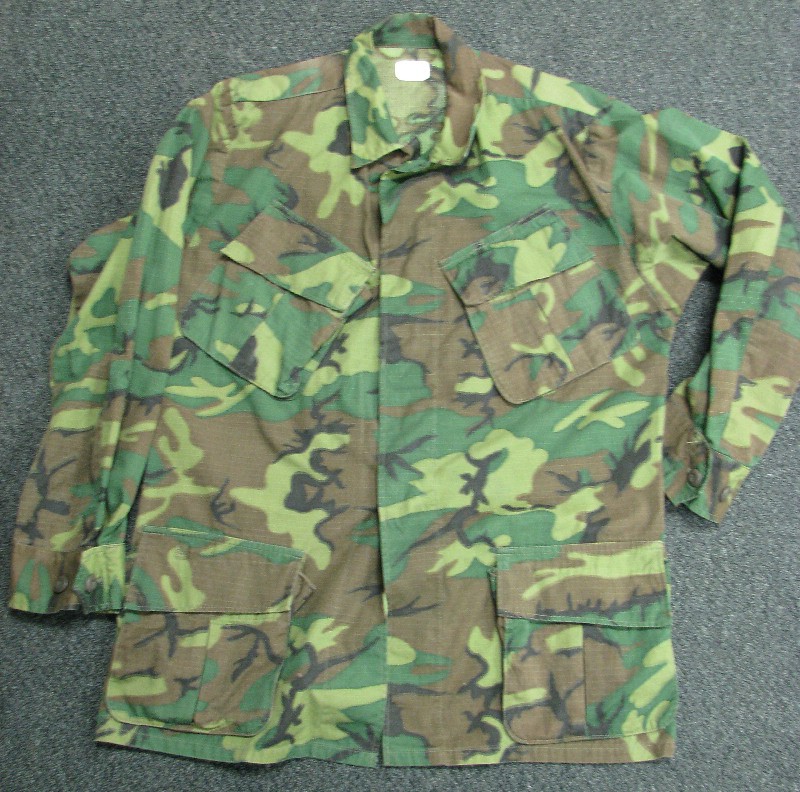 On the jacket there is an M16 rifle - unfortunately in 1:35 it is more than 5mm too long. I have shortened it slightly by cutting off some of the stock. The barrel was covered up with a Claymore mine bag from the Pplus Model set number 191:

The helmet is supposed to have a Mitchell pattern liner:

Painting such camo pattern works a lot better, if you look often at your references - like a photo of the real thing.

To complete the figure and on request from the veterans assisting me in my work I have added a cigarette, a watch, a bracelet and a letter from home.

A letter - ready to print (together with an envelope) can be downloaded below, in case somebody reading this finds it useful:

Despite the changes I have made to the vignette there are still isuues that it has: