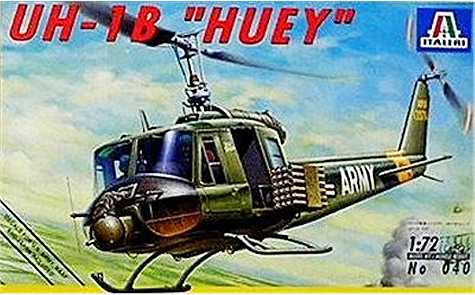 The diorama “The Last Flight” shows a hypothetic situation from the Vietnam War times – a downed helicopter and its last surviving crewmember preparing for the uneven fight with a North Vietnamese Army patrol. The diorama is based on the Italeri UH-1B Huey kit (number 040) supplemented with Eduard photoetched detail set number 72195 made specifically for this kit, Hasegawa figures from the "NATO Pilots and ground crew" set number 1246, a pilot figure from Hasegawa "UH-60 Blackhawk" kit and figures from the Italeri’s "Vietnamese army/Vietcong" kit number 6079.

As usually I did a little planning before I stated the actual build. I placed the helicopter’s fuselage halves taped together on a clean sheet of paper, to try out the diorama outline and its components’ layout. As soon as I had this layout set I went on to build the helicopter. The Italeri kit shows the usual high standard of manufacturing and detail accuracy, but nonetheless I went on to improve it even further, building details like the seats’ bases, the instrument panel, the door pillars, door handles etc. As I decided to build the doors as open (an option not available out of the box), I had to file them out and replace them with a photoetched part from the Eduard detail set number 72269. Although this set is meant for another variant of the helicopter, the fit was very well anyway. Because the glass was to be shown as broken, I replaced the kit parts with a thin clear styrene sheet (with the exception of the front windows). Other details also had to be fabricated, like the fire extinguisher, ammo boxes, the machine gun mounts (the machine guns themselves come from the Italeri M113 kit). I rebuilt one of the pilot figures and posed it so as to show him “hanging” on the seatbelts with his head hung forward. Another figure was posed to show a corpse floating on the surface of the water. Another figure, from the ground crew set was rebuilt and equipped with a gun. I didn’t have to rebuild the Vietnamese, because they already have suitable poses.

I used Pactra acrylic paints for painting of the diorama. The shading and highlighting of the uniforms’ creases was done using Rembrandt’ artist oils. Additionally I used the MIG pigments and pastels (for smoke and mud traces etc.).

After the work on the helicopter was done, the time came to build the base for the other components of the diorama. I used a 5 millimeter thick plywood for this purpose. After lining it with appropriately fitted sheet styrene I got the “depth” of my rice field. Now was the time to shape the bottom and the embankment. As usual in such cases the cellulose mass works best. Although it can be bought ready-made, I went on make it myself as a mixture of water, white glue, flour, toilet paper and some salt. After the mass was dry I additionally covered the bottom of the rice paddy with a mixture of white glue, sawdust and static grass. Using the same mixture I made the traces of dragging the helicopter’s fuselage over the surface and the earth bank pushed up by the helicopter’s nose. After that was done I “planted” the rice. I imitated the stems with bristles of paintbrush glued in the pre-drilled holes. The rest of the plants was made using samples of dried “live” plants and static grass. After the “gardening” was finished, the time came to paint. All of the base was painted with artist oils mixed to my liking, to match the characteristic color of the Vietnamese terrain.

After gluing all of the diorama components, like the helicopter, and figures to the base, I poured a thin layer of two-component epoxy resin (Axson brand) over the whole rice field. The trick here is to pour it over artist’s oils that didn’t completely dry yet. This causes the oils to mix with the resin during the application (it was poured about 1,5mm thick and was stirred with a brush), resulting in a look reminiscent of particles of disturbed mud suspended in water.