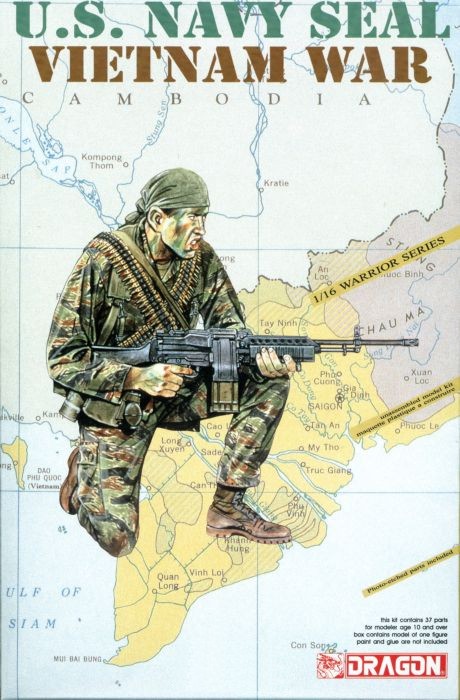 The basis to build my diorama was a sailor figure from a 1:16 Dragon kit number 1607 „US Navy SEAL Vietnam War”. In my opinion it’s a good model, has lots of detail and doesn’t require any major changes or additions. Personally I decided to add belt to the machinegun. Other than that the figure was built out of the box. Having a small display case at hand, I came to the idea of building a box diorama encasing the figure from almost all sides, at the same time creating the climate of a dark tropical forest.

I started by building the sailor figure itself. Painting of the face was unusual, as it was to be camouflaged in green. I achieved the desired effect with dry brush. The next, biggest challenge was painting the „tiger stripe” pattern of the uniform. I did it by first painting the whole surface light green. After the paint was dry I started to apply small spots of brown, dark green and black with the smallest brush I had, so that the light green base would show through tiny gaps between the spots, like intended. After the paints dried, I applied three light dark washes for shading – it was the only shading procedure at that time I was sure not to spoil the whole work. Fitting the ammo belt (supplied in straight runs) required some work, I painted the runs first, and then fitted them by bending and cutting where necessary, then after some spot-painting it was done.

The building of the diorama started with building a cardboard box tightly fitting inside the display case. Next I started putting plants in the box. I mostly used dried meadow plants I found in my garden. Two main compositional parts of the diorama are the „palm” and the fallen tree. The tree is made of a branch of grape vine. Its separating bark is simply picturesque. To be original, the “palm” is man made – out of two layers of tissue paper with a length of copper wire between them and glued with white glue. After appropriate wet forming I had to wait a while, then I could form the torn edges of the leaves and shape them. After everything dried I airbrushed the insides of the box and the palm using the same paints as for the sailor. That way the camouflage seems to be better. The final assembly was done using white glue.