I started working on the hull by plugging the openings in the bottom of the hull - they are leftovers from times when the kit was sold as motorized: 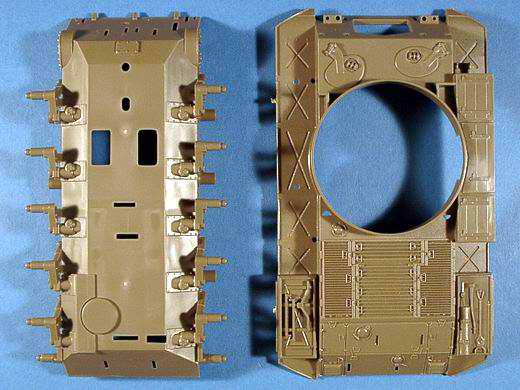 To close every of the unwanted openings I used an appropriate piece of styrene rod or sheet. Then I went on with some heavy cutting, to remove inaccurate parts to be replaced with ones from the add-on kits. A lot of filling also has to be done to get rid of the traces of that brutal operation. Usually I sanded the filler (Surfacer) and painted the surface with compatible paint (Gunze) to check for any imperfections, hence the "spotty" look of the model:

Similarly, the hull top also requires lot of work, while doing this I decided to take even more radical approach to the mufflers area than suggested by the Eduard kit.

After painting the interior (without detailing) light gray with dark olive drab floor I glued the hull top and bottom together. The results are shown on the following photos: 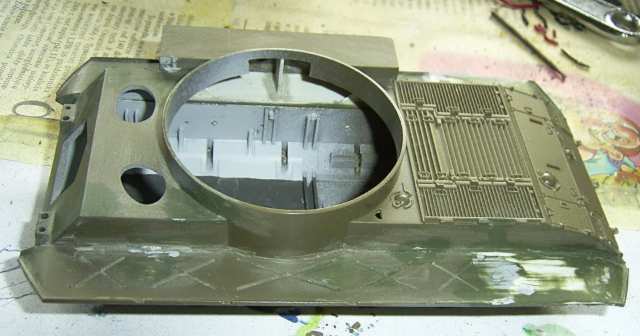 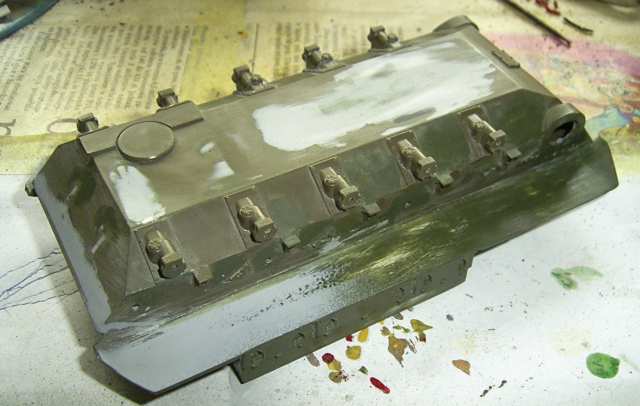 After many touch-ups I decided the hull is finally smooth enough and it received a coat of light gray primer and the suspension from the AFV-Club kit. Installing the suspension was a very pleasant job. Interestingly, the AFV-Club kit also contains the volute spring bumpers for the suspension arms, even though they aren't mentioned in the instructions. Unfortunately, the shock absorbers needed to be lengthened; otherwise the Duster would sit much to low. To ensure that all road wheels will finally be in contact with the ground, I suspended the hull above an even surface and installed the rocker arms so that they would touch the surface until the glue dried completely. In case of acetone, which I used to do the job, you have to let it dry for some 24 hours before the joints get really hard, but it saves you trouble later. On the photo, the rocker arms on the closer side are being tested with out-of-the-box length shock absorbers, on the far side they were lengthened. 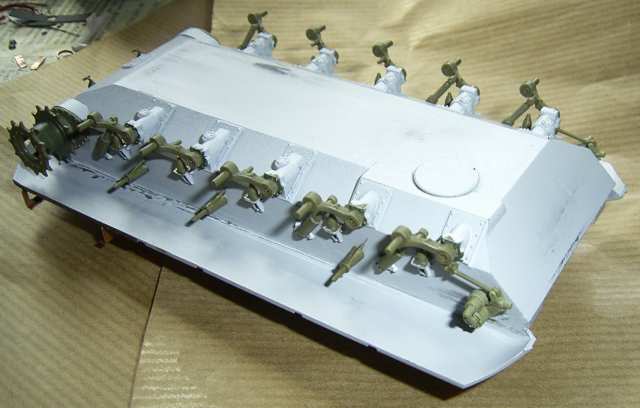 Now I started reconstructing the mufflers with their housings. To do that I took some copper sheet metal, shaped with jeweler's scissors, hand motor tool and pin-files: 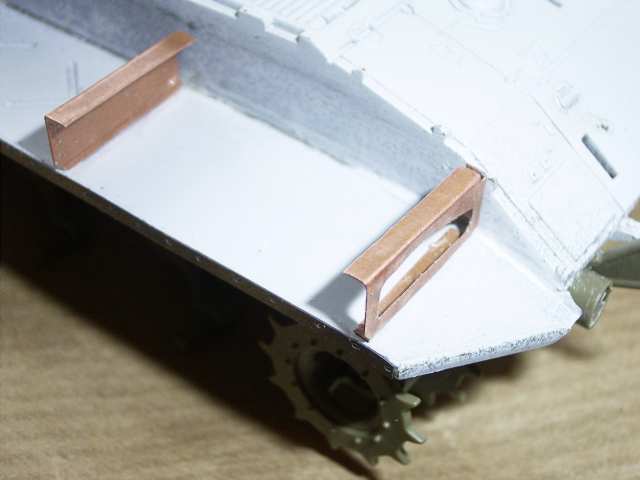 After building the racks, the time came to do the mufflers themselves. They are pretty big objects, and a question arose, as to how to make them. A combination of 1mm polystyrene sheet and sprues gave good results. The exhaust pipes are made of brass tube. The photo also shows one of the muffler's covers:

The mufflers were painted rusty and installed on the vehicle: 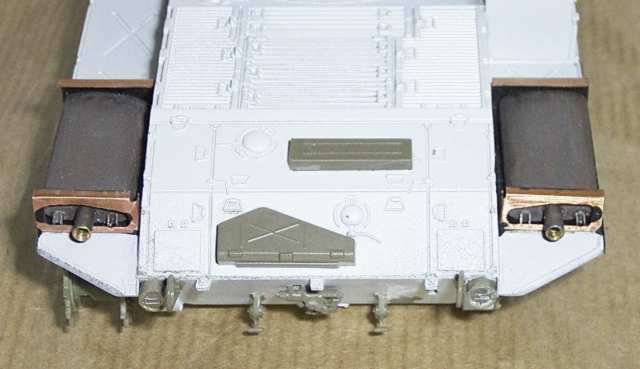 And one more take, the arrow points to one of the mentioned volute spring bumpers from AFV-Club suspension kit: 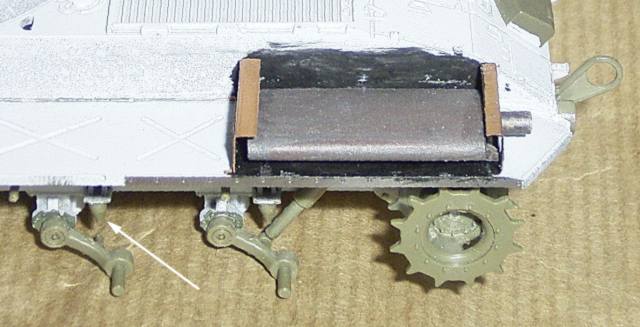 Next, the muffler's covers were installed and then I started to tackle the left side ammo box. Underneath this box, spare barrels for the 40mm main armament were stowed. These were made out of copper sheet metal and a plastic drink straw, cut lengthwise: 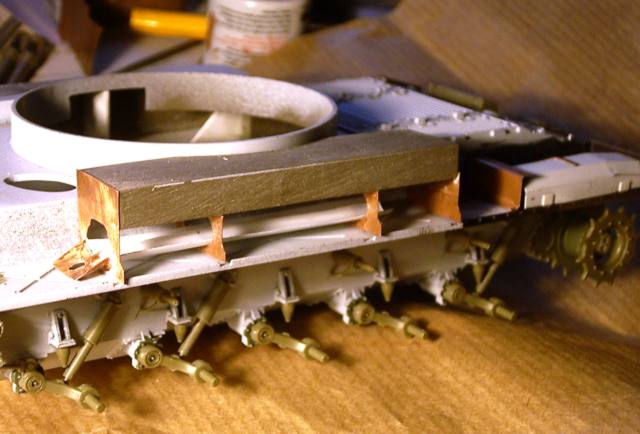 The next critical components of the rear portion of the vehicle are the air cleaners, which don't look out of the box. I made the air cleaner drums from 11mm aluminum tube, which I got by cutting an old electrolytic capacitor to pieces. Air hoses are made of polystyrene sheet and sprue. Next photo shows the comparison of kit's air cleaners with scratchbuilt ones, accompanied by one of the tool racks from Eduard, which will be installed above the right muffler:

My research also showed that some kind of filler cap cover is present under the left air cleaner's hoses, which is incorrectly recreated in model and needs work - moving the cap. To do that, the factory cap was "shaved" and a new one built from scratch, out of polystyrene and copper wires. The effect is shown on the next photo: 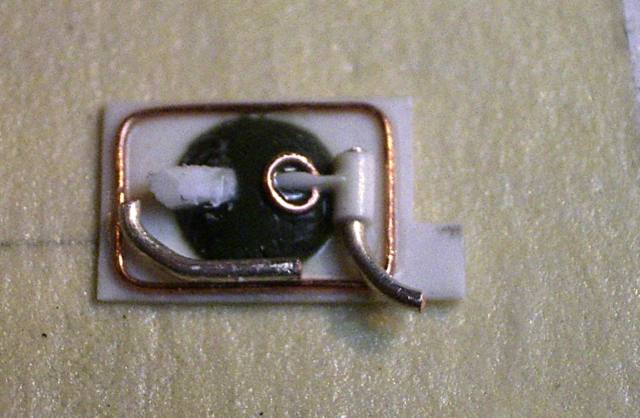 There is a housing on the rear deck, through which the APU's exhaust pipe exits. The APU (Auxiliary Power Unit) supplies power to the vehicle while the main engine isn't working. Making the housing out of copper sheet metal and styrene strip was the last thing to do on the rear deck before painting the vehicle. On the photo below the previously mentioned filler cap cover can be seen (under the left air cleaner's tubes), the housing (next to right air cleaner's tubes), scratchbuilt reinforcements and tie-downs (on the turret ring) and also the tool racks above the mufflers: 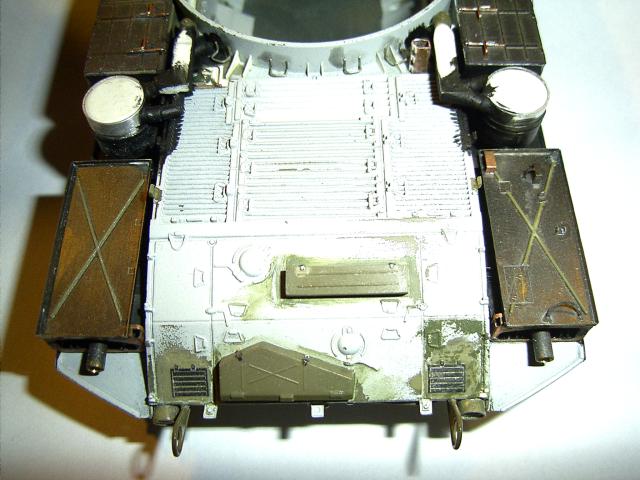 The only thing missing in the rear of the hull were the chains securing various lockings of caps and hatches against accidental loss. After adding them, the rear hull looked like shown below: 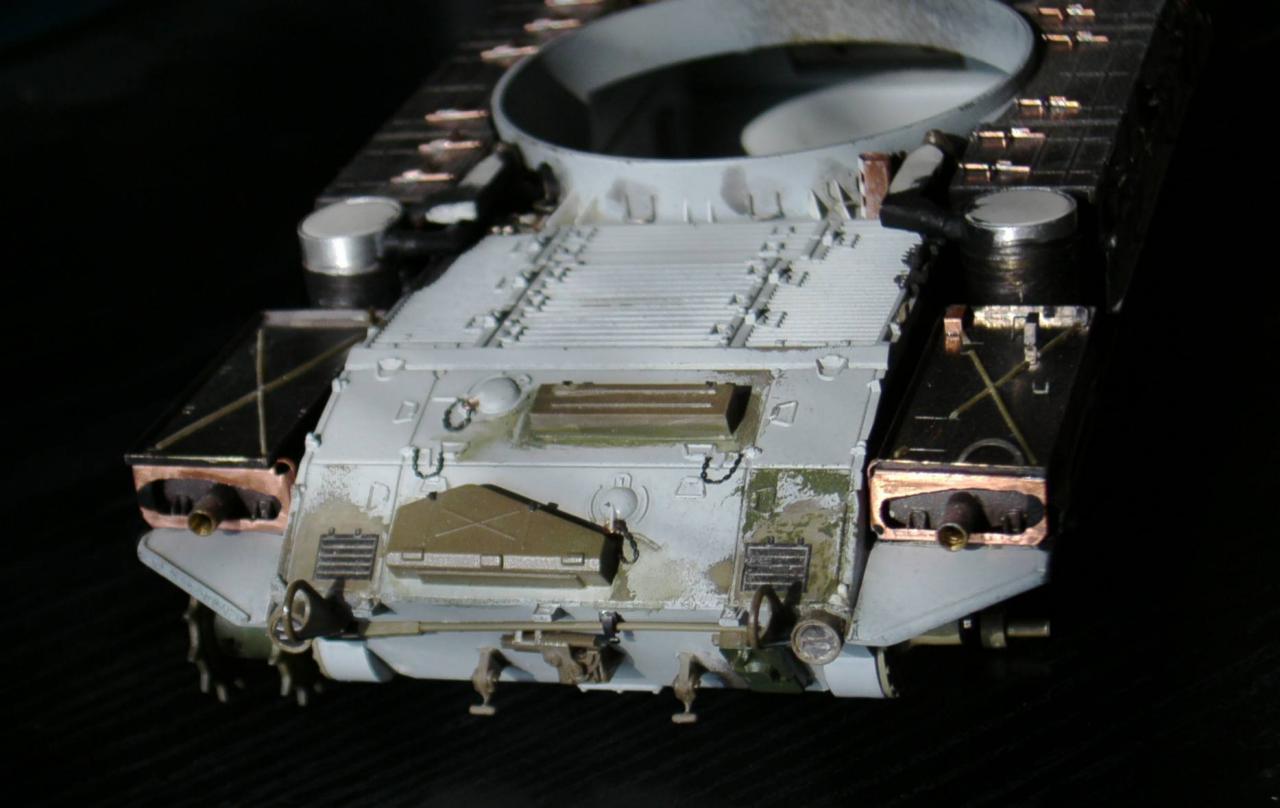 On the front hull, I manufactured the hatches of the driver and the vehicle commander, complete with hinges, seals (made of thin soldering wire), latches securing them in open position and equilibrating springs. I also manufactured the large hatch on the glacis plate and a hinge for the part securing spare barrels in place. I also added various photoetched parts, like driving lights' brush guards, jerry can holder, periscope guards, fittings on the ammo boxes and so on. Front hull at this stage is shown on the photos below: 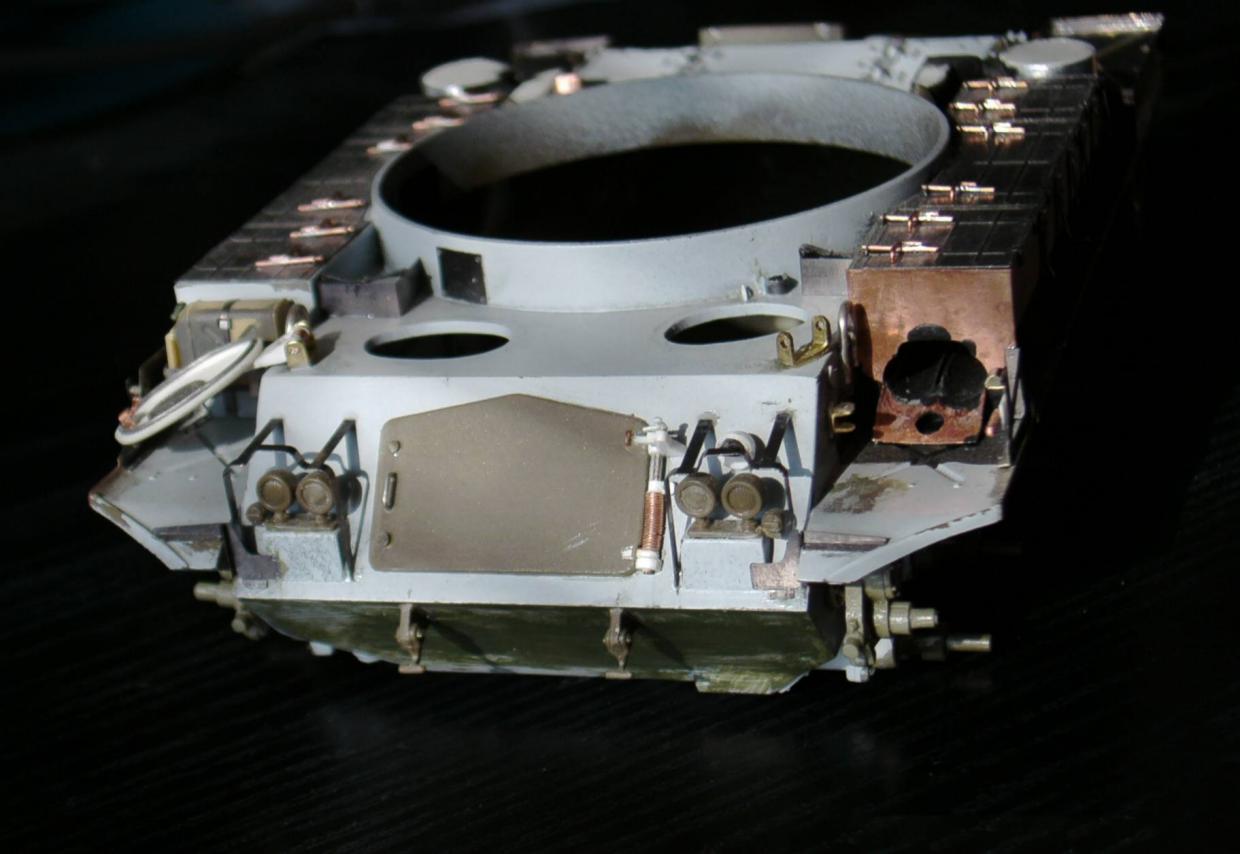 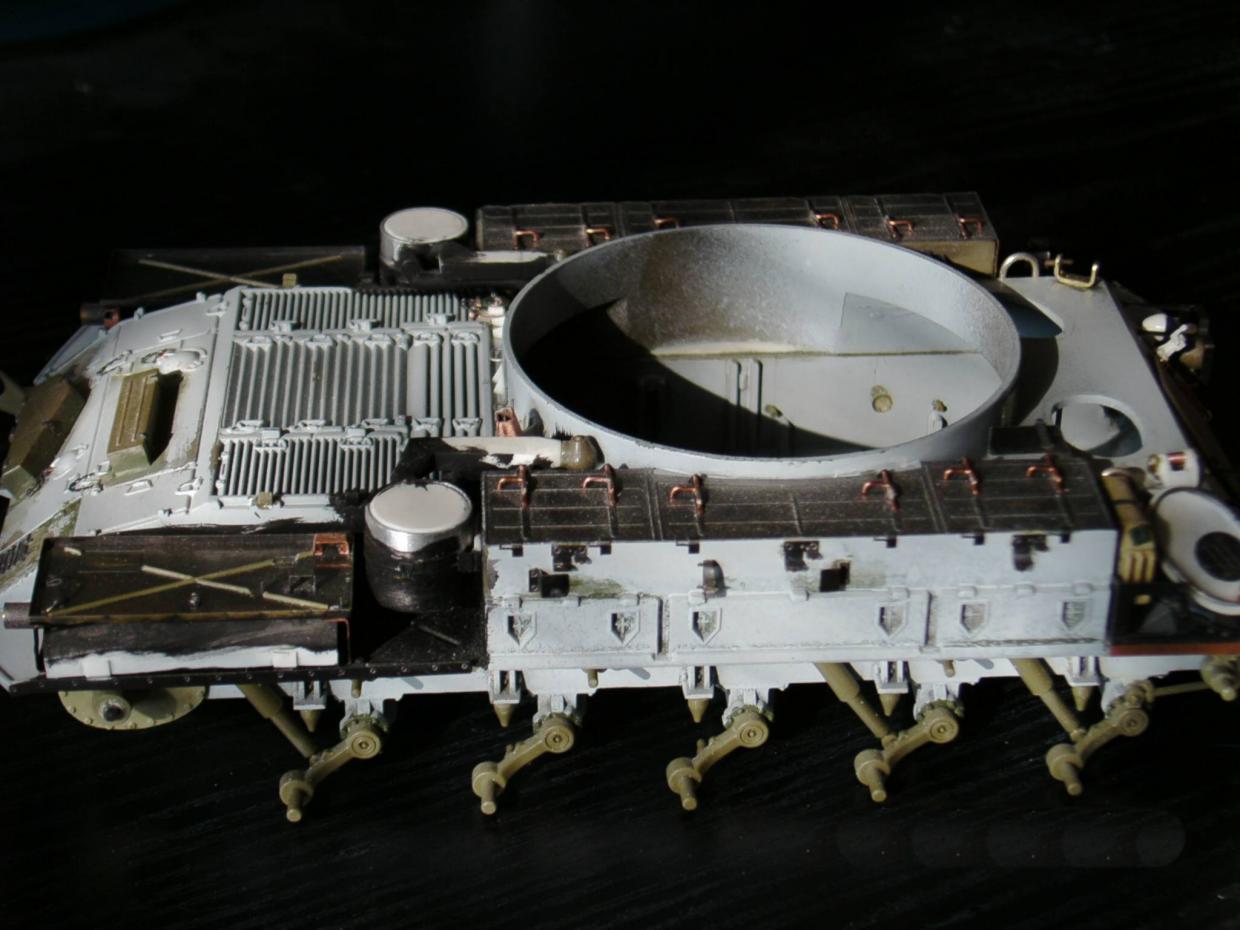 However, after analyzing the drawings, it appeared to me, that it would be helpful to use the conical portions of the kit part, after necessary corrections. On the following photo work in progress can be seen, from the top: my drawing of the barrel in 1:35 scale, barrel in the gun that will reside in the turret, then the kit's part cut in two pieces, the first piece after reworking, then the second piece, yet untouched: 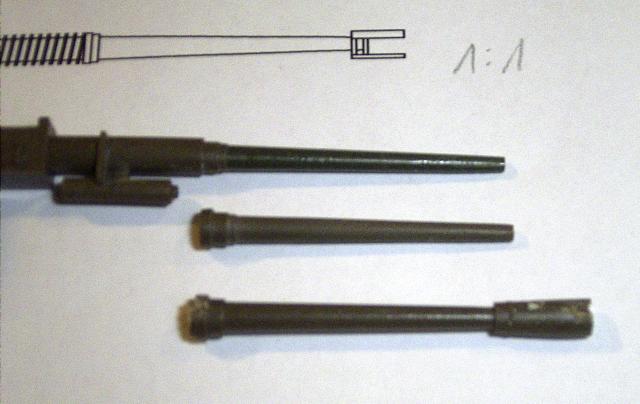 As the work on the model drags on for years, all the time I gather new reference material. Sometimes I discover shortcomings of my work so severe, that I have to start over building some of the details. First to go were the hatches of the driver and the tank commander - it turns out in the Tamiya kit they are too small in proportion to the rest of the vehicle. Thats why I enlarged the openings I already have cut in the hull and again I scratchbuild their covers. Below the tops of the new hatch covers:

And after they were provisionally installed in the hull: 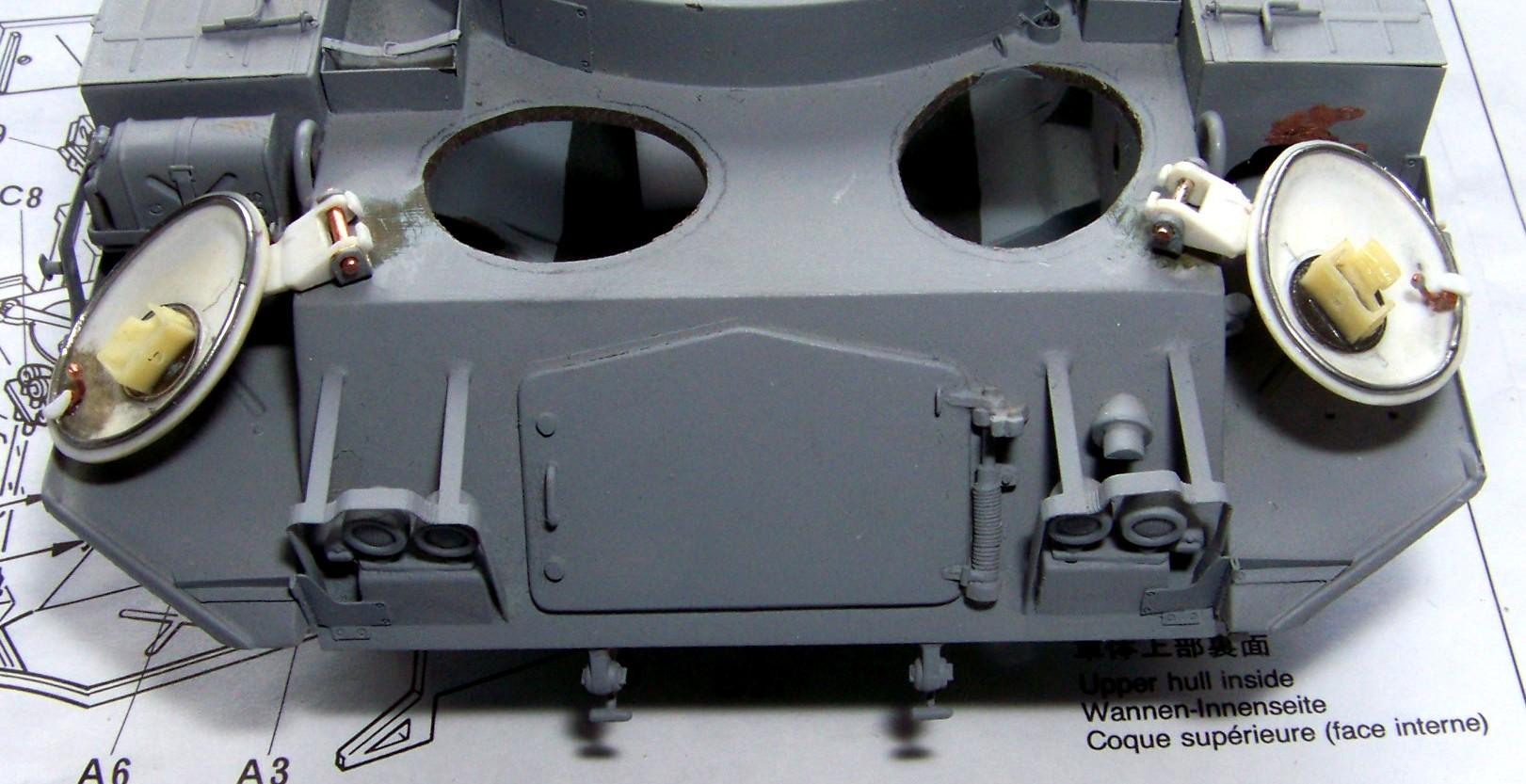 Very characteristic details of the insides of the hatch covers are the periscope mounts. Very often on the photos from Vietnam it can be seen, that the periscopes are not installed - presumably out of fear of damaging them, or due to the lack of spares. In my model I built the mounts using the Verlinden set number 0341 "US Tank Periscopes WWII", however drilling out the "periscope" was necessary, so that only the mount was left.

Later I got reference material showing a very interesting feature of the hull bottom - there is a rather large opening, through which spent casings of the main armament are conducted outside the vehicle. To depict this in my model I had to cut an appropriate opening and build a chute, leading from the mentioned opening to the base of the main armament mount. Inside the chute, there is a tunnel through which various cables are conducted from the hull to the main armament mount via dedicated slip rings. I cut the opening in the hull bottom using my trusty method of drilling multiple holes along the opening's edge and then connecting them using a sharp knife and/or side cutters: 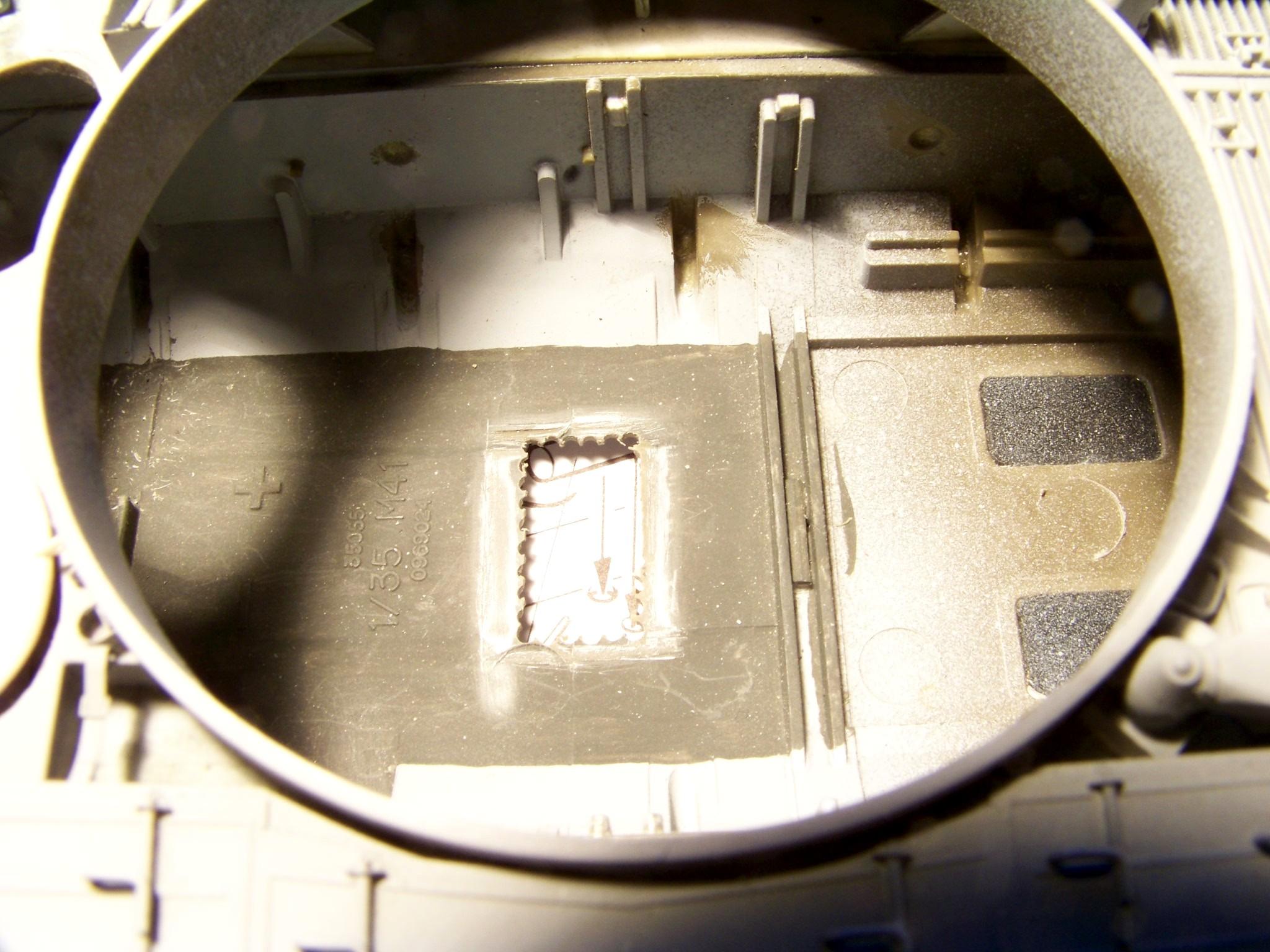 The chute consists of two parts, a rectangular and a round one. I built the rectangular part of 1mm sheet styrene; the round part was rolled out of copper sheet and soldered: 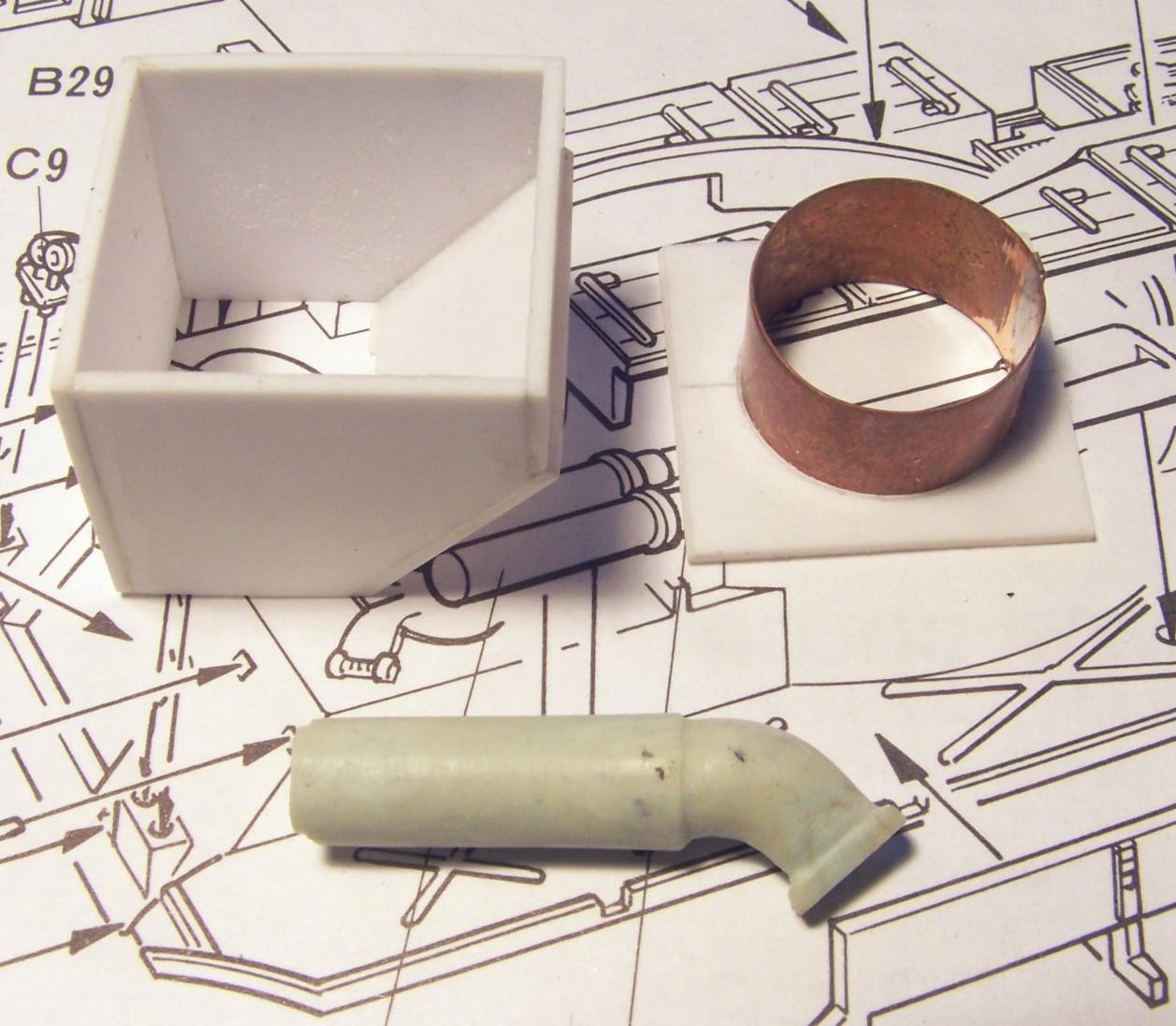 The cable tunnel was made out of thick styrene rod, which I got from a plastic clothes hanger, which was bent after heating it, and then sanded for the right shape with a file. The tunnel is too long now; it will be cut down to fit before the final assembly.