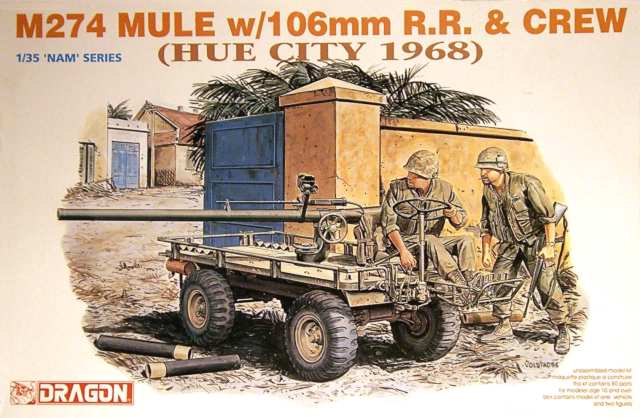 I have built the diorama on display shortly after the 1/35 scale Dragon model kit No. 3315 "M274 Mule w/106mm R.R. & Crew (Hue City 1968)" appeared in my local model shop. This model kit contains parts to build one M274A1 vehicle, the M40 recoilless rifle without tripod, two figures of US Marines and one recoilless rifle shell. The M274 is very nicely done, demanding modellers may fell the desire to additionally detail the undercarriage of it with details like pushrods and linkages. Additionally, Eduard produces a set of photoetched parts, No. ?? for this kit, however I didn't use it. 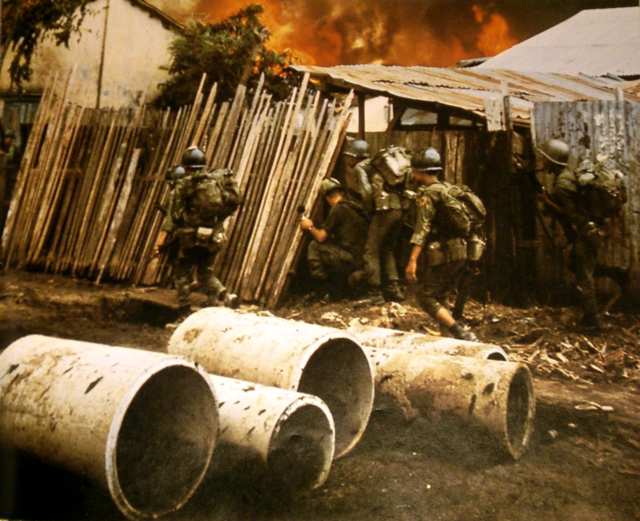 I decided to show my model on a little diorama, inspired by a foto showing fights in an urban area of Vietnam. In order to do that, I built a frame about 150 by 200 mm from a wooden floor trim, which was then filled with a styrofoam plate. The surface of the styrofoam plate was covered with acrylic filler, texture of which was shaped using a wet brush while it was still fresh. At the same time tire tracks of the "Mule" and footprints were done.

The fence was built of thin modelbuilding plywood and wooden strips, the other one from splinters produced by splitting a piece of a timber plank. The corrugated sheet was built of two layers of paper glued together and placed between series of wooden barbecue sticks while the glue was still wet. Similarily, the concrete pipes are rolled and glued paper. The tree is a fragment of a plant found on a meadow, with leaves glued on, made of tea. The diorama is also rounded up with trash made of cedar wood shavings taken out of an automatic pencil sharpener, glued with white glue. The diorama was painted with Humbrol paints, with an airbrush, like was the M274. I painted the figures with Humbrols, but also with acrylic paints called Decorfin by Talens.

The figure of the soldier walking by, right out of the box had a stance I didn't like, so I made use of the razor-saw, glue and filler, and he straightened up. That's not the best thing to do on a battlefield, but his previous pose didn't look natural, rather reminding of a gorilla. Changing a pose of a plastic figure is surprisingly easy to do, if one uses acetone or methylo-ethylo-ketone (MEK) as glue. Then a change of pose is possibble before the solvent evaporates and the gluing place hardenes.

Known bugs of the model are: the lack of mentioned details on the undercarriage and inconsistencies in finish (matt/gloss) between base and vehicle.