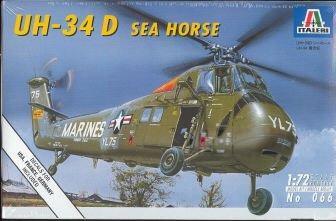 My model of the UH-34D was built from Italeri's kit, number 066 (now reissued as 1066 UH-34J). This kit is very pleasant to build, the fit of parts and accuracy are good. The markings of my model are per kit's instructions, supplemented only with hand-painted stencilling. My model was built as soon as the kit appeared in our hobby shops. This was some time ago and since then I have some doubts regarding my model. Some sources indicate the direction of rotation of the tail rotor depicted in the kit is wrong. The shade of green used to paint the model also appears too light.

The helicopter is painted representing the markings of HMM-362, one of the first helicopter units to arrive in Vietnam. This is an early paint scheme, so called "high visibility". Such scheme was advantageous early in the war: the helicoptes so painted were easy to spot from other aircraft, easy to find in case of forced landing. As losses from enemy fire grew, the painting was changed to one giving better camouflage, but this made spotting helicopters flying low or sitting on the ground from other aircraft difficult.