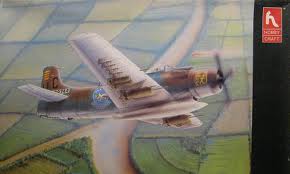 My model of the Skyraider was built out of a kit by a company called Hobby Craft (kit number HC1367). Other than this kit, the company also sold the same set of sprues as kits number HC1368 and HC1369:

The parts looked good out of the box, the panel lines were recessed, mostly in correct locations and the armored plates were more or less correct. Changes I made to the kit included detailing the cockpit with photoetched parts from the Eduard company, set number 72227 (Main and side panels and floor, although this set is meant for the Hasegawa kit, but you have to live with what you have). I also reworked the seat , because it didn't look like the original and I reworked the canopy sliding mechanism behind the headrest and the canopy rails. I also detailed the landing gear bays with Eduard's photoetched parts, built new exhaust stacks out of hypodermic needles. I added armament from the Hasegawa set and RBF tags from another Eduard set and a weapon transport cart from the Hasegawa ground equipment set number 35005. As for the crew figures: the pilot comes from the Hasegwa ground crew set number 35007, the South Vietnamese soldier is from an unknown set. The figure was made of an awful plastic (pretty close to rubber), that no paint would adhere to. Fortunately I have a vacuum pump, so I made a mold and I cast this figure in resin (I do this with most "suspect plastic" parts, and also for economic reasons). The model was painted with Humbrol paints, washed with artist's natural umber oil paint and the smoke was made using pastels. The decals came with the kit and the markings represent the 83rd Special Operation Group.