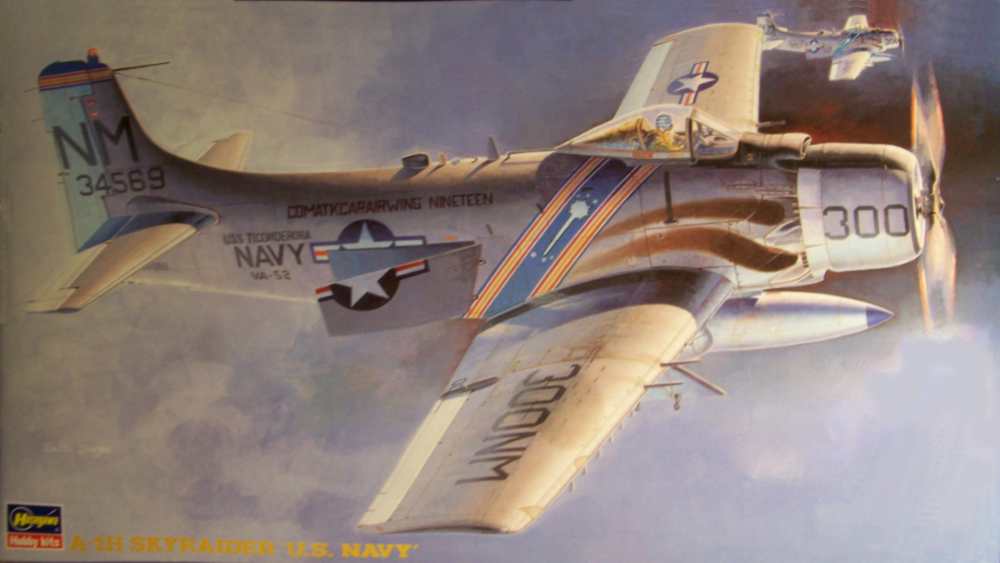 I built my model of the Skyraider basing on the Hasegawa kit number 51406. This kit is of good quality, as is typical for today's kits of this company. Parts fit and detail accuracy are very good. Nevertheless I decided to execute several conversions to additionally improve the detail of my model. The cockpit gives the modeller the most oportunities to improve on the kit, because it is the most simplified part of the kit. The landing gear bays come second in this regard. Normally, in Hasegawa's kits the ordnance is absent, the Skyraider is an exception with four SUU-14/A bomb dispensers and three external fuel tanks, anyhow leaving 10 suspension points empty. Nonetheless the SUU-14/A dispensers are a valuable and welcome addition to the model as they are hard to find in other kits. The Hasegawa kit was supplied to depict a US Navy aircraft, and as I was going to build a USAF Skyraider, further modifications were necessary. There is a Hasegawa kit showing a USAF Skyraider on the boxtop (00780), but it's internally identical with the kit I used and as such requires the same modifications to be correct.

For my model I used the Eduard photoetched kit number 72227, and also installed the main landing gear bays by Aires (number 7097) and the wheels also by Aires (number 7221). I scratchbuilt the "Yankee seat". Additionally I modified the engine cowling flaps to show them in the "open" position, which was frequently seen in Vietnam and also is a good opportunity to show off the engine, which, built "out of the box" would be completely covered by the flaps. When the engine cowling flaps are open, a rod must extend from the engine cowling, signalling the cowling state to the pilot. I fabricated this rod from a small piece of fishing filament. As mentioned I replaced all three landing gear wheels - main gear wheels are exchanged to show the stamped sheet metal type, typical for Skyraiders seen later in the war, as the kit's cast type whels had a tendency for cracking and were replaced. The tail wheel on carrier based aircraft was just a small solid-rubber roller, for land operations USAF replaced it with a small pneumatic tire wheel, what I depicted courtesy of my spares box.

I completed the weapon load to show a typical search and rescue loadout, also known as the "Sandy-load" - additionally to the four kit supplied SUU-14/A dispensers I also built four LAU-61/A rocket launchers with aerodynamic fairings from the Hasegawa X72-1 "Aircraft Weapons:I U.S. Bombs & Rocket Launchers" kit, the front fairings are kit-supplied, while the rear, open-ended fairings are scratchbuilt. Four phosphorous bombs A/N M-47A4 were scratchbuilt using parts sprue ant thin polystyrene sheet for material. I only used one of the kit-supplied 300 gallon/1136 liter drop-tanks. The second, 150 gallon/568 liter drop tank carried on the right side comes from the Revel 04398, A-1E/AD-5 Skyraider kit. The SUU-11A/A minigun pod, carried on the left side comes from the Mastercraft AH-1G kit, number B31 (B32 to B34 could also be used, as well as the kit from a company called Plastyk Pruszków number 134 - the same sprues, just don't try to build a Cobra out of these kits, they are pretty bad, but cheap).

The Aircraft carries the markings of the 1st SOS - Special Operations Squadron, USAF. I did the painting with preshading and other weathering, the most prominent being the exhaust streaks on the fuselage sides and oil drips around the engine, normally plaguing the Skyraider. I used an Eagle Strike Productions decal kit number 72004. I definitely recommend this kit, it contains enough markings for five complete models and in addition the modeller gets a detailed documentation concerning the painting of each aircraft.